7th CPC: Bunching of steps in the Revised Pay structure 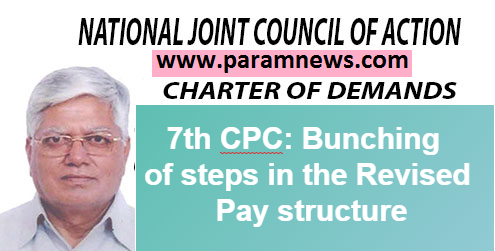 Although the rationalisation has been done with utmost care to ensure minimum bunching at most levels, however if situation does arise whenever more than two stages are bunched together, one additional increment equal to 3 percent may be given for every two stages bunched, and pay fixed in the subsequent cell in the pay matrix”.

In consonance with the recommendation, the said order stipulated that officers drawing pay where the difference is less than 3% shall not be entitled for this benefit.

However vide order No 1-6/2016-IC dated 03.08.2017, DOE, IC issued a clarification which was virtually to wipe off the benefit to a large number of employees. They placed 4 (four) conditions for the grant of Bunching benefit as under.

i) Benefit on account of bunching is to be extended when two or more stages get bunched. (ii) Benefit of one increment is to be extended on account of bunching of every two consecutive stages. (iii) As stipulated in MoF OM dated 07 09.2016, a difference of 3% to be reckoned for determination of consecutive pay stages, specific to each employee. (iv) All pay stages lower than the Entry pay in the 6th CPC pay structure indicated in the pay Matrix contained in the 7th cpc Report are not to be taken into account for determining the extent of bunching.

Condition No (iv) has been incorporated as an afterthought it must be construed as one contradictory to the very intention expressed in clear terms by the Commission.

The Staff Side demands that the condition No (iv) in the order cited may be deleted so as to provide the benefit of Bunching to all deserving employees.