The construction of Pay Matrix has opened up very many anomalies. From the illustration given here under, it could be seen that a person in higher Pay level but drawing same basic pay of person in the lower pay level gets lesser pay. It could also be seen that certain Stage in PB-2 GP 5400 has more benefit than a similarly placed employee in P83 GP 5400. (see the table). The Pay Matrix therefore has to be changed to remove the anomaly.

The Basic Pay from the stage 3 of Level 9 of the Pay Matrix recommended by 7th Central Pay Commission shall be higher than of stage 1 of level 10 for a same amount of pre revised basic pay (Pay in Pay Band + Grade Pay) for the grade pay of Rs 5400 in PB 2 and Rs 5400 in P8 3. As per the 7th CPC chart on Pay Matrix the pay for level 9 and 10 are as follows:

As per the 7th CPC chart on Pay Matrix the pay for level 9 and 10 are as follows: 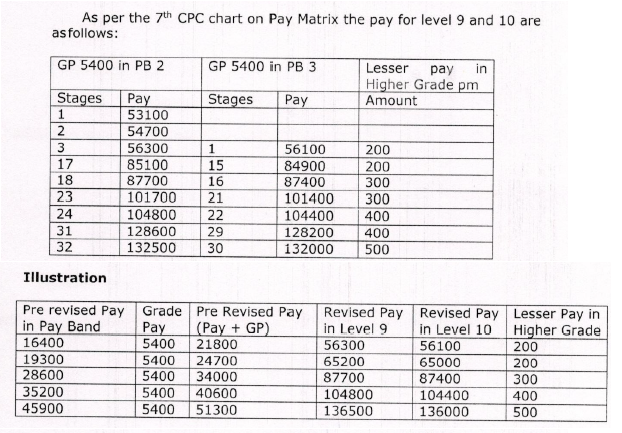