Railways | Induction of Trackmen into other departments – RBE 146/2018

GOVERNMENT OF INDIA
MINISTRY OF RAILWAYS
(RAILWAY BOARD)

Sub: Induction of Trackmen into other departments.

Para 179 (XV) of IREM Vol. I (Revised Edition-1989) provides for induction/transfer of Trackmen to Mechanical Engineering and Transportation (Power) Department, Traffic & Commercial Department and to the Works side of  Engineering Department against 10% quota.

2. It is seen that the Railways have been experiencing difficulty in implementation of these instructions due to reliever(s) not being readily available in the Engineering Department. This has been considered by the Board. In order to ensure viable· implementation of these instructions, it has been decided that henceforth 10% of the proposed intake for recruitment in Level-l (erstwhile Group ‘D’) of all those departments where there is provision of induction of Trackmen against 10% quota, will be clubbed to recruit equivalent number of Trackmen in addition to the intake of Trackmen decided for the Engineering Department.

3 . Trackmen in Engineering Department should be laterally transferred to those departments whose 10% vacancies have been clubbed and utilized for recruitment of Trackmen. Other departments will be allowed to induct fresh personnel for the residual 90% of vacancies and also to meet their requirement through fresh personnel to the extent of deficiency not met through lateral transfer.

5. Applications for lateral transfer of Trackmen to other departments,. should be called for department wise and applicants shortlisted on basis of seniority based on the length of service. Separate applications should be submitted for each such notification. The complete list of applicants should be displayed and also placed on the web page of the division. It is reiterated that for transfer to other departments, a Trackman/Gangman should be suitable in all respects . including possessing physical standards prescribed for recruitment to that Department/Workshop. 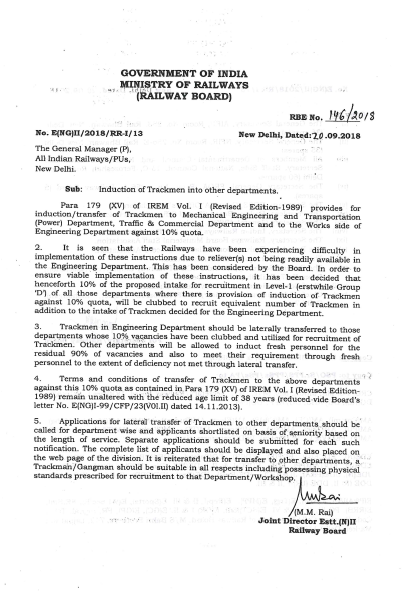