The All-India CPI-IW for April, 2019 increased by 3 points and pegged at 312 (three hundred and twelve). On 1-month percentage change, it increased by (+) 0.97 per cent between March, 2019 and April, 2019 when compared with the increase of (+) 0.35 per cent between the corresponding months of previous year.
[post_ads]
The maximum upward pressure in current index came from Food group contributing (+) 2.26 percentage points to the total change. At item level, Arhar Dal, Fish Fresh, Goat Meat, Poultry (Chicken), Fresh Milk, Chillies Green, Garlic, Ginger, Onion, Apple, Banana, Lemon, Brinjal, Cabbage, Carrot, Cauliflower, French Bean, Green Coriander Leaves, Lady’s Finger, Methi, Palak, Peas, Potato, Radish, Tomato, Torai, Electricity Charges, Ornament Glass, etc. are responsible for the increase in index. However, this increase was checked by Eggs (Hen), Tamarind, Bitter Gourd, Parval, Cucumber, Kharbooza, Mango (Ripe), Flowers/ Flower Garlands, etc., putting downward pressure on the index.
The year-on-year inflation based on CPI-IW stood at 8.33 per cent for April, 2019 as compared to 7.67 per cent for the previous month and 3.97 per cent during the corresponding month of the previous year. Similarly, the Food inflation stood at (+) 4.92 per cent against (+) 3.96 per cent of the previous month and (+) 1.33 per cent during the corresponding month of the previous year.
At centre level Rourkela, Howrah and Siliguri reported the maximum increase of 7 points each followed by Mysore, Munger-Jamalpur and Varanasi (6 points each). Among others, 5 points increase was observed in 8 centres, 4 points in 8 centres, 3 points in 15 centres, 2 points in 23 centres and 1 point in 10 centres. Rest of the 8 centres’ indices remained stationary.
The indices of 35 centres are above All-India Index and 43 centres’ indices are below national average.
[post_ads_2
The next issue of CPI-IW for the month of May, 2019 will be released on Friday, 28th June, 2019. The same will also be available on the office website www.labourbureaunew.gov.in.
(AMRIT LAL JANGID)
DEPUTY DIRECTOR 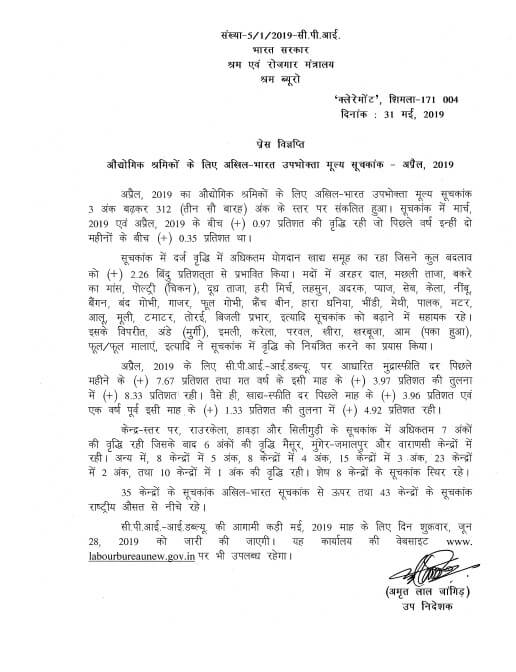