Govt servants not to criticize the Govt | CAA protest or any political activities through FB, Twitter, WhatsApp, Insta etc. 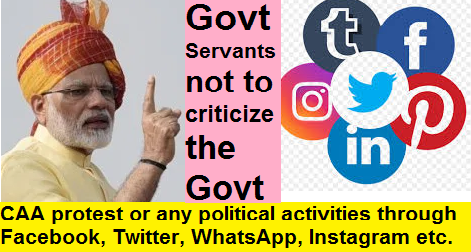 In an office order G Phukan Director of Higher Education stated, “It is brought to the notice of all concerned that under 7 of the of the Assam Civil Service (conduct) rules 1965, a government servant shall not make any statement of fact or opinion criticizing the government.

Recently, instructions issued by the Department of Personnel and ‘Training prohibit the Government servants from participating in any form of strike including mass casual leave. go slow etc. or any action that abet any form of strike/protest in violation of Rule 7 of the CCS (Conduct) Rules. 1964. Besides, in accordance with the proviso to Rule 17(1) of the Fundamental Rules. pay and allowances is not admissible to an employee for his absence from duty without any authority. As to the concomitant rights of an Association after it is formed, they cannot be different from the rights which can be claimed by the individual members of which the Association is composed. It follows that the right to form an Association does not include any guaranteed right to strike/protest.

With several state government employees taking part in the anti-Citizenship Amendment Act (CAA) protest, Director of Higher Education Assam has asked the government servants not give any statement of fact or opinion criticizing the government.

In an office order G Phukan Director of Higher Education stated, “It is brought to the notice of all concerned that under 7 of the of the Assam Civil Service (conduct) rules 1965, a government servant shall not make any statement of fact or opinion criticizing the government. If the government servant is found criticizing the government, he/she will be held responsible for violation of Rule 3 and rule 7 of Assam Civil Service (conduct) rules 1965 which will attract the appropriate provisions of the Assam services (discipline and appeal) rules 1964."

Earlier the elementary education department issued an order prohibiting teachers and other employees from taking part in political activities. The order said the government had noticed that a section of government employees, regular and contractual, had been indulging and participating in political activities on different social media forums like Facebook, Twitter, WhatsApp, Instagram and others. It said these activities are a violation of the provision of Assam Service (Discipline and Appeal) Rules, 1964, adding the department had formed a cell to monitor “such prohibited activities”.

On December 18 Assam government employees in several areas participated in the cease work campaign. Assam finance minister, Himanta Biswa Sarma earlier warned, “Teachers should be in school, doctors in hospitals and officers on duty after work if they participate in protest called by non-political organisation government has nothing to say however they must refrain from political platforms. Do not take this as festival of not going to work.”

Chief Minister Sonowal also said that his government is carrying out survey of ceiling surplus land of tea garden areas just to ascertain the quantum of land to be given to the people belonging to tea tribe community. He at the same time allayed the fear generated by some vested interest groups that land survey being done by the State government would entail selling the land to outsiders. He maintained that land which originally belongs to tea tribe community will remain with them. 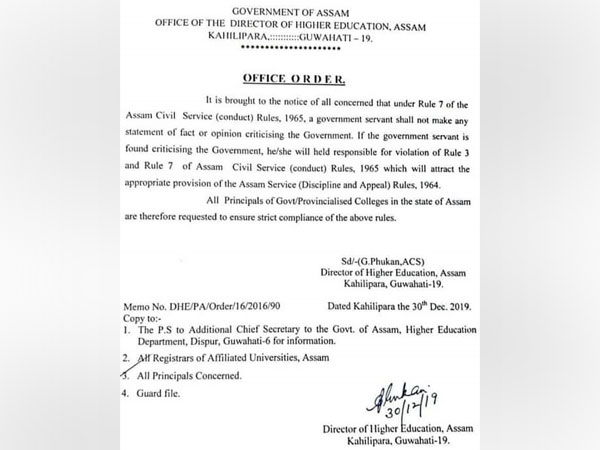