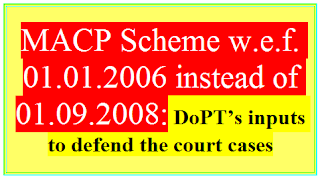 No. 2-24/2019-PCC
Government of India
Ministry of Communications
Department of Posts

On the above noted subject, I am directed to inform you that this Directorate has received an OA bearing No. 291/558/2019 titled as Bharu Ram Siklitgar Vs UOI & Ors. and your office might be received the same being a respondent in the case.

3. In this regard, I am directed to forward herewith a copy of Department of Personnel & Training Office Memorandum No. 43019/5/2019-Estt.-D dated 01.11.2019 containing facts / grounds for defending the issue involved in the OA, and request you to kindly get the counter reply prepared and filed on the basis of the facts / grounds provided by the DoP&T.

4. It is also requested to defend the case properly and to intimate the outcome of the proceedings periodically to this Directorate.

The undersigned is directed to forward herewith a notice in OA. No. 291/558/2019 titled as Bharu Ram Siklitgar Vs UOI & Ors regarding grant of benefits of MACP/ACP Scheme, received in this Department, before the Hon’ble CAT, Jaipur Bench, for appropriate action. DOPT has been impleaded as Respondent no. 2 and Department of Post has been impleaded as Respondent no. 1in this case

2. This Department’s OM No. 20036/23/ 1988-Estt.(D) dated 06.01.1989 provides that since each case is to be contested on the basis of the specific facts and circumstances relevant to it, the administrative Ministry/Department will be in a better position to defend the case. If, however, any clarification is required on the all interpretation or application of the rules or instructions relevant to the case, the concerned department in the Ministry of Personnel, Public Grievances and Pensions may be approached for that purpose in terms of this Department’s OM dated 28.10.2015. It further provides that the primary responsibility, however, for contesting such cases on behalf of the Government will be that of the administrative Ministry/Department concerned. Further, the Cabinet Secretariat’s D.O. letter No. 1/50/3/2016-Cab dated 16.06.2016 and the Department of Expenditure’s OM No. 7(8)/2012-E-III(A) dated 16.05.2012 inter-alia provide that (i) a common counter reply should be filed before a Court of Law on behalf of the Union of India by the concerned Administrative Department/Ministry where the petitioner is serving or has last served; and (ii) a unified stand should be adopted instead of bringing out each Department’s/Ministry’s point of view in the said reply. It further provides that it is primarily the responsibility of the Administrative Ministry to ensure that timely action is taken at each stage a Court case goes through and that a unified stand is adopted on behalf of Government of India at every such stage. In no case should the litigation be allowed to prolong to the extent that it results in contempt proceedings.

3. It is the responsibility of the Administrative Organisation/ Department to defend the case where DoPT is a proforma party. So far as this matter is concerned, the Applicant is seeking benefits of MACP Scheme w.e.f. 01.01.2006 which is not admissible as per MACP Scheme 2009. Therefore, the following comments may be incorporated in the counter Affidavit to be filed on behalf of UOI in this matter:-

(i) The matter relating to grant of benefits w.e.f. 1.1.2006 under MACP Scheme to civilian employees is subjudice before the Hon’ble Supreme Court of India in SLP Nos. 10811-10813/2018 in the matter of Union of India Vs. Shri Ranjit Samuel which has been filed by MOD against the order dated 14.02.2017cof Hon’ble High Court of Judicature at Madras in Writ Petition Nos. 33946, 34602 and 27798 of 2014, wherein Madras High Court held that the benefit of erstwhile ACP Scheme cannot be negated by bringing a new Scheme i.e. MACP Scheme with retrospective effect. Subsequently, O/o C&AG have also been advised to file SLP against the order of Bombay High Court in a similar matter. This SLP of O/o C&AG and other similar matters have been tagged with SLP No. 10811-10813/ 2018 and are being heard together by the Apex Court.

(ii) Further, the 6th Pay Commission recommended separate Schemes for civilian and the Defence Personnel. After the recommendations were considered and approved by the Cabinet, D/o Expenditure issued Resolution dated 29.08.2008 in respect of civilian employees. M/o Defence issued Resolution dated 30.08.2008 regarding extension of 6th CPC benefits to Armed Forces Personnel. Thus the Civilian and the PBOR personnel are governed by two different Resolutions.

(iii) The recommendations of the 6th CPC were accepted by the Government only on 29.08.2008 (30.08.2008 in case of PBOR). The recommendations of the 6th CPC were required to be examined and a Scheme was to be formulated in consultation with Department of Expenditure and the same took considerable time for its implementation. Before implementation of the Scheme, a cut off date had to be decided/fixed. Accordingly, the Government has taken a conscious decision for implementing the MACPS w.e.f. 01.09.2008. Though the MACPS came into existence only w.e.f. 01.09.2008, the benefits of the existing ACP Scheme of August, 1999, was allowed to the Government servants upto 31.08.2008.

(iv) Changing the effective date of implementation of MACP from 01.09.2008 to 01.01.2006 may be beneficial to certain employees, but this would also place certain other employees at a disadvantage thereby entailing huge recoveries from them. It may be difficult to make recoveries from the employees who have availed higher financial benefit under ACP during 01.01.2006 to 31.08.2008 and retired from service.

(v) The MACP is a condition of service and, hence, cannot be given retrospective effect. It is upto Government to take a conscious decision to implement it uniformly from a certain date.

(vi) It is not feasible to extend the benefits of MACP during 01.01.2006 to 31.08.2008, as more than nine years of time has passed since the implementation of MACP and the issues have been settled as per extant instructions. The change of effective date will lead to surge of litigation particularly from employees who availed the benefits of ACP Scheme during 01.01.2006 to 31.08.2008.

4. Therefore, in the counter reply to be filed by Department of Posts in the matter, the issue relating to pending SLPs before the Hon’ble Supreme Court as mentioned at para 3 above should be clearly brought out so that the Hon’ble Tribunal can take these into consideration while deciding the matter in 0.A No. 291/558/2019.

5. Department of posts is also requested to update/fill the details of the instant case in www.limbs.gov.in and also ensure the status of the case be monitored and updated