Home » retired saffs » Review of 7th CPC Pension Revision and Other Issues: Minutes of Meeting with CPAO and All Bank’s CPCCs other than SBI

Review of 7th CPC Pension Revision and Other Issues: Minutes of Meeting with CPAO and All Bank’s CPCCs other than SBI 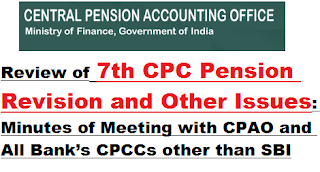 Minutes of the Meeting

Kindly find enclosed the Minutes of the Meeting held on 09.01.2020 at 10:00 AM at Conference Hall of Central Pension Accounting Office (CPAO) with all Heads of CPPCs of all the Authorized Bank other than SBI to review the implementation of 7th CPC pension revision and to discuss other issues under the Chairmanship of Chief Controller(Pensions) for information and further necessary action.

Minutes of the meeting held on 09.01.2020 with all the Heads of CPPCs/ Government Business Divisions of all the Authorised Banks (excluding State Bank of lndia (SBI)) to discuss various issues.

A Meeting was held on 09.01.2020 under the Chairmanship of Chief Controller (Pensions) with the representatives of Authorised Banks for Pensions (excluding Stale Bank of India (SBI)) to discuss the timely payment of revised pension and arrears under 7th CPC and other pension related issues. At the outset, Chief Controller (Pensions) welcomed all the participants and emphasized on the need of timely payment of revised pension and arrears in the accounts of the pensioners by the banks. Agenda items of the meeting were discussed in detail and the following decisions were taken.

Read - Review of 7th CPC Pension Revision and Other Issues: Minutes of Meeting with CPAO and SBI CPCCs

Agenda Item No. 1- Implementation of 7th CPC Pension Revision and its reporting by Banks

It has been observed from the reports as on 30th December, 2019 that there are delays in crediting the revised pensions as well as arrears of pensions/family pensions by the banks. As per the reports, there are many cases which are pending for more than 31 days. Bank wise details of the pending cases were handed over to all the representatives of the concerned banks. Most of the banks reported that they had already revised and credited pension to the pensioner/ family pensioner accounts.

It was informed by the banks that revision of pension cases arc pending due to following reasons,

a) Discontinued PPO (more than 3 years.)
b) Non submission of life certificate.

Keeping in view of the above. it was decided that all the banks would :

Agenda Item No. 2- Obtaining KYC from banks [or settlement of pending revision cases.

Most of the revisions pertaining to 7th CPC are already done. As per the records of CPIO, 119690 revision of pension cases are still pending as details of some pensioners are not available with either concerned PAO or Head of Office.

All the CPPCs were requested to send KYC details of such pensioners.

Banks were instructed to ensure forwarding the acknowledgement of e-SSA electronically to CPAO at the earliest so that the difference between e-SSA forwarded by the CPAO and e-SSA received by the Banks could be nullified. They were provided the formal for acknowledgement and were also advised to share their inputs with NIC CPAO, if any problem is faced.

READ  7th CPC HRA Clarification: Any special dispensation allowed in past shall continue to apply

All the Banks were again requested to make necessary changes in their software accordingly and comments, if any, may please be submitted to CPAO.

It has been observed that clear and complete compliance reports are not being submitted by the concerned Banks.

Banks were requested to give full details in their compliance reports of the objection raised by Internal Audit Wing so that the same could be verified and settled. Banks were also asked to improve and strengthen their internal control mechanism to avoid re-occurrence of the mistakes pointed out by the Internal Audit Wing of CPAO.

The possibility of providing a utility to upload the compliance report on the Bank’s login section of CPAOs website will also be explored.

Internal Audit Wing was instructed to prepare an “Audit Manual under the guidance of Technical Section, CPAO.

It has been observed that family pension, additional pension and commuted portion of pension are not timely commenced/restored. Since these issues are regularly discussed in the various meetings i.e. SCOVA Meeting, High Level Meeting. Standing Committee Meeting, etc.. all the banks were advised to ensure timely payments.

CPAO is responsible for the disbursement of death/disability pension under NPS­ Additional relief. First time identification of the pensioners is being done in the Bank branches based on the KYC details available with the Banks where the pensioners/ family pensioners have opened their pension accounts. CPAO starts the pension payment based on the first time identification report received from Banks. These banks branches are also responsible for sending the life certificates of the pensioners/family pensioners to CPAO for the continuation of pension to NPS-AR pensioners, in the month of November as CPAO is the disbursing authority.

However, it is noticed that in many cases, despite submission of life certificates by the pensioners, bank branches have not forwarded the same to CPAO. It has also come to notice of this office that some bank branches are refusing to accept life certificate from NPS-AR pensioner for onward transmission to CPAO.

It was decided that CPAO will send the details of pending life certificates of NPS-AR pensioners to CPPCs of concerned banks with a request to instruct concerned branches to obtain and furnish the life certificate to CPAO in time so that pensioners are not put under any financial hardship.

All the banks were requested to accept life certificate both physically and digitally and promote “Jeevan Praman” among pensioners.

Further, banks were once again informed that they should not make payment in

Agenda item No.7 – Return of Old PPO by the Banks.

It has been noticed from the CPAO data base that the 3467 pensioners are still drawing pension from the old alpha numeric code. These alpha numeric data is reflected in the Payment scroll. Bank wise details were provided to the concerned Banks.

I t was decided that all the Banks will send a scan copy of the PPO for allotment of 12 digits PPO Number.

Pension Payment Orders which are not in operation /inactive may be returned to CPAO for deletion from the CPAO database. It is noticed from the database of CPAO that old PPOs which are inactive are not being forwarded by the bank to the CPAO. Banks were advised to forward the same to CPAO at the earliest

Agenda Item No. 8 – Submission of e-scrolls and Master Data Reconciliation

It has been observed that there is no improvement in submission of e-scrolls by CPPCs. Bank wise details were provided to the banks.

Details of pending scrolls were shared with the ban ks and all the banks were instructed to ensure that e-scrolls are updated on a daily basis to CPAO after matching it thoroughly with the pension pay men ts made. Banks should ensure that the date of scroll should be the date of transaction as appearing in the put through statement issued by RBI. Furthermore, if any problem is faced by the banks in uploading the e scroll, they may contact this office on email addresses given on next page:

Correct and reconciled master data maintained at CPPC level is a must for ensuring correct payment of pension to the pensioners and avoid chances of excess/less/wrong payment of pension. However, many instances have come to the notice of CPAO regarding less/over payment of pension leading to the grievances and court cases by the pensioners. The reason for discrepancy in payment of pension is that CPPCs are not reconciling the master data with the CPAO database regularly. There is inordinate delay in uploading of Master Data by the banks. Some Banks have not submitted their Master Data for last 4 years. Por updating on Master Data al CPAO level, whenever any value/data in the pension of a pensioner/family pensioner is changed, the same is required to be reported by the bank through Format-F of e-Scroll. However, it is noticed that banks are not providing the changed information to the CPAO.

All the banks were instructed to upload Master Data for reconciliation and submit the changed information in Format F on “quarterly” basis. Furthermore, if any problem is faced by the banks in uploading the master data, they may contact this office on email addresses mentioned below:

At present BSR code is being used in CPAO to identify bank branches. It has been observed in many cases that Pensioners do not know BSR code of Pension Account Holding Branch and even many bank branches do not know their BSR Code and often misunderstand it with branch code. IFSC is another unique code which can be used to identify individual bank branches and is known to both banks and pensioners. RBI has also given its consent for using IFSC instead of BSR code for identification of bank branches.

All the banks were requested to provide IFSC code of their branches for creating a mapping of IFSC and BSR Code, if not already provided.

Agenda Item No.10- Handing over of SSA to the pensioners by banks

At present, pensioner copy of SSA is being sent to the pensioners through post. References are being received by pensioners that they are not receiving their SSA copy due to following reasons.

1. Some pensioners change their addresses after retirement.

2. Some pensioners/family pensioners arc illiterate and they are not well versed with technology to take printout of their SSA from CPAOs website.

All the banks agreed to provide a copy of SSA to the pensioner by the Pension Account Holding Branch on request of the pensioner.

It has been observed that many grievances are pending with banks and a large number were pending cases arc more than 30 days. Banks informed that they had disposed some of the grievances but not updated them under WRPS module.

Banks were requested to ensure that all the grievances which arc pending with them are disposed of within one month and update the same on the WRPS portal so that pensioners are informed accordingly.

Agenda Item No.12-Providing of Payment Details to all the Pensions

As per CPPC guidelines, CPPCs should provide account statement, TDS details, pension slip, the Due and Drawn Statement in respect of each arrear and the Annual Income Statement to the pensioner.

Banks were requested to follow the CPPC guidelines and provide the pension slip, breakup of the pension and arrear payments and other information as required to the pensioners.

Agenda Item No. 13 – Issues pertaining to Defence Accounts, Dept of Telecommunication and Ministry of Railways

a. Acknowledgement of e-PPO by Banks

All the banks were suggested to develop a mechanism for acknowledgement of e­PPOs by banks.

b. Delay in crediting of pension and family pension in the account of the pensioners.

It has been observed from the e-scrolls received in the 0/o PCDA that some of the Banks arc crediting pension and Family pension very late in the account of pensioner. All the banks were handed the pendency list and were requested to improve their performance in crediting the pension/family pension on time.

c. To provide image of PPO for data purification

All the Banks were requested in the meeting O/o provide PPO image to them to facilitate data pu rifica tion which was agreed to by the banks.

d. Attend the meeting as and when it is convened by the PCDA.

It was also suggested that banks, which are being merged should prepare a concordance table for IFSC.

a) Recovery of excess and overpayment of pension

c) Delay in Timely Payment of Pension and Family Pension

a) Non-submission of E-scroll on time and Reconciliation thereof.

Agenda Item No. 14-Any other points with permission of chair

a) Payment of LTC to the pensioners of UT Chandigarh

The issue of payment of LTC to the pensioners of UT Chandigarh was raised. The issue is being examined by the Central Pension Accounting Office (CPAO).

The meeting ended with a vote of thanks to the chair.