[post_ads]
A copy of CGDA, Delhi Cantt AT Order No. AT/II/2366/Dress Allowance/Vol-I dated 31-12-2018 regarding payment of dress allowance is forwarded herewith for information and necessary action, please. It is also requested to circulate the same to all AOs under your jurisdiction, please.
Encls: As above.
Sd/-
Dy. Controller of Accounts (Fys)
THE CONTROLLER GENERAL OF DEFENCE ACCOUNTS
ULAN BATAR ROAD, PALAM, DELHI CANTT: 110010
No.AT/II/2366/Dress Allowance/Vol-I
Dated 31 Dec 2018
To
The PCA(Fys)
Kolkata

[post_ads_2]
Consequent upon the implementation of 7th CPC, Uniform Allowance/ Washing Allowance/ Stitching Charges/Shoe Allowance etc have been subsumed in Dress Allowance. The order on the same was notified vide DoPT OM No. F. No. 14/4/2015-JCA 2 dated 31.08.2017. During the course of compliance of ibid DoPT OM by controllers, this HOrs has received several references on the below mention points:
(a) Whether, in the absence of any letter/authority from the concerned unit regarding the categories to whom the dress was supplied earlier (before 7th CPC), the Dress Allowance can also be admitted in audit for Non- Industrial person as per DoPT OM dated 31.08.2017.
(b) Whether Dangries, which is a protective cloth provided to Industrial person of MES/AOC, can be admitted in audit under Dress Allowances as per DoPT OM dated 31.08.2017.
(c) If Dress Allowance is not admissible to the industrial personnel in MES for overall combination (Dangri), whether washing allowance which was in vogue, is to be continued or otherwise.
2. The issue has been examined at this HQrs and the following is advised:
(a) While dealing with the grant of Dress Allowance in terms of DoPT OM dated 31.08.2017 and to ascertain the categories of employees to whom the dress was supplied prior to the implementation of 7th CPC, a certificate. which includes all conditions prior to the implementation of 7th CPC, a certificate. which includes all conditions mentioned in DoPT OM dated 31.08.2017, may be obtained from the claimant unit alongwith the bills.
(b) Regarding the Dress Allowance to MES/AOC employees to whom Dangri is issued and were granted ‘washing allowance’ of Rs. 24/- per month, E-in-C branch has been approached vide this HQrs letter 25.10.2018 to provide a list of Uniforms duly classified as Basic Uniform and Special Clothing being provided to MES Employees. In response, HQ MES. vide their lette- B/20943/LIV/GEN/EIC(2)/53 dated 22 Nov 2018, has intimated that a case has been taken up with MoD regarding grant of Dress Allowance to Industrial Personnel of MES and decision/ sanction is awaited (copy enclosed). However, as regards to Gp ‘C’ and Gp D staff of MES. it has been intimated that various items of liveries were being provided to them has been stopped and they are entitled for Dress Allowance as per DOPT OM No. 14/4/2005-JCA-2 dated 31 Auc 2017. Therefore, the Dress Allowance to MES personnel may be regulated in accordance with HQ MES ibid letter.
This issues with the approval of Jt CGDA(P&W). .
Sd/-
(Ashish Yadav)
Sr. ACGDA (AT-I)
Director General (Pers)/EIC
HQ Military Engineer Services
Engineer-in-Chief’s Branch
Kashmir House, Rajaji Marg,
New Delhi-110011
B/20943/LIV/GEN/EIC(2)/53
22 Nov 2018
Office of the CGDA
Ulan Batar Road, Palam
Delhi Cantt - 110010 .

l. Reference your letter No AT/II/2366/Dress Allowance/Vol-I dated 25 Oct 2018
2. It is intimated that various items of liveries for Summer and Winter were being provided to the Gp ‘C’ and erstwhile Gp ‘D’ staff (CMD, Peon, Daftry, Chow & Safaiwala etc.) of MES which has been stopped after the issue of Govt of India Ministry of Personnel, Public Grievances and Pensions, (Department of Personnel & Training) Establishment (JCA-2) Section F No. 14/4/2015-JCA-2 dated 31 Aug 2017 received vide Ministry of Defence, Deptt of Defence, D (Civ-II) ID No. 18/3/2008/D (Civ-II) dated 20 Oct 2017. Hence, they are entitle for Dress Allowance as per the directions given in ibid letter.
3. Moreover, a case regarding grant of Dress Allowance to Industrial Personnel of MES is taken up with MoD and on receipt of their decision/sanction the same will be communicated to all concerned.
(Sanjay Garg)
Col               .
Dir (Pers) EIC
Ce For E-in-C 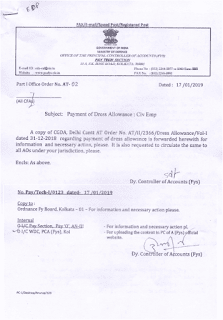