Subject: Clarificatory OM for payment of two family pensions on death attributable to Govt service of a re-employed pensioner  regarding

The undersigned is directed to say that references have been received in this Department seeking clarification as to whether a second family pension is admissible under CCS(EOP) Rules when a military/civil pensioner is re-employed in civil service dies and his death is attributable to Government Service.
[post_ads]
2 Vide this Department's Notification No G.S:R, 938(E) dated 27.12.2012, sub-rule 13A and 13B of Rule 54, prohibiting two family pension, have been deleted. Subsequently, vide OM No 1/33/2012-P&PW( E) dated 16 1.2013, two family pensions have been allowed in the event of death of a re-employed pensioner, in service or after retirement. The financial benefits for the past cases however is with effect from 24th September, 2012. Thus under CCS(Pension) Rules, two family pensions are admissible with effect from 24th September 2012.
3. The matter has been examined in the context of the provisions of CCS(Extra-ordinary Pension/Rules it is clarified that the provisions of two family pensions, one in respect of military/civil service and.the other for civil service after re-employment, as available in terms of CCS(Pension) Rules, is also applicable under COS(EOP}Rules. In other words on death of a pensioner who was re-eamployed in civil service where death is attributable to government service, family pension under CCS(EOP Rules in respect of Service In re-employment would he admissible in addition to ordinary family Pension in respect of the previous military/civil service.
4 Where, however, on death of a re-employed civil Government servant, the family is eligible for Special/extra-ordinary family pension under the EQP-rules in respect of the first spell of service, family pension fer the second spell of service would be admissible under the CCS(Pension) Rules, 1972 only.
5. The extra-ordinary family pension shall be granted only in one service. In no case, both the family pension shall be granted under EOP Rules.
[post_ads_2]
6. The financial benefits in the past cases will accrue with effect from 24th September, 2012, as in the case of family pension under CCS(Pension) Rules.

7. Formal amendment in Central Civil Service (Extraordinary Pension) Rules will be made in due course.
8. This issues with the approval of Department of Expenditure, vide their ID Ne 1(5)/EV/2012 dated 3/4/2017 and 15/01/2019
(Sujasha Choudhury)
Director 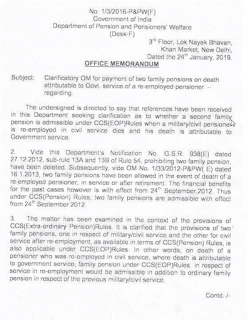 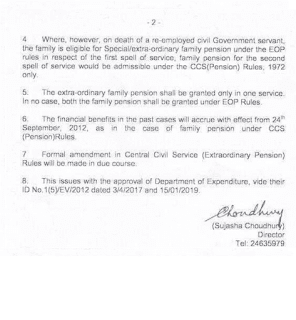