Sub:-Simplification of Procedure for grant of Family Pension in some Railways/Workshops.

The 31st   SCOVA meeting is scheduled to be held on 06.09.2019 under the Chairmanship of Hon'ble MOS(PP). In the agenda of the meeting, an issue regarding non acceptance of the revised dependency criteria for sanction of family pension by some Railway divisions & Workshops has been raised. Another issue regarding non­-acceptance of self declaration of income by claimant in case of private employment has also been raised.

3. Further, Railway Board 's letter No. F(E)III/98/PN 1/4 dated 9.9.1999 (RBE-229/99), vide which DOPPW's O.M dated 21.7.1999 has been forwarded, para (ii) stipulates that income certificate as stipulated is required to be insisted upon before authorizing Family Pension to eligible sons and daughters (including widowed/divorced daughters) and dependent parents. In case these beneficiaries are self-employed or in receipt of income from sources other than employment, Income Certificates furnished by the concerned beneficiaries themselves may be accepted for the purpose.

4. The aforesaid rules may strictly be adhered to, so as to see that no inconvenience is faced by the family pensioners.
[post_ads_2]

This issues with the concurrence of F(E) Directorate, Ministry of Railways. 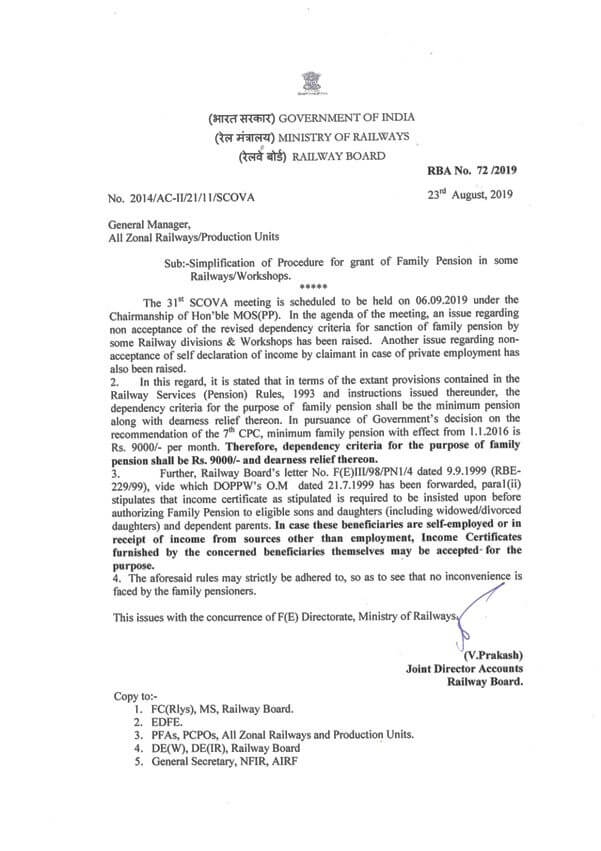