NAPSrC | National Action Plan for the welfare of Senior Citizens

Will the Minister of SOCIAL JUSTICE AND EMPOWERMENT be pleased to state:

(a) whether the Government is concerned about the fact that the country has the second-largest population of senior citizens who deserve care and concern, and the fast-paced and ever-changing life of today is continuously widening the gap between generations and thus the creation of a happy environment for the elderly is our traditional, moral and now even legal responsibility;

(b) if so, the details thereof and the steps being taken by the Government in this regard;

(c) whether the Government proposes to remove the ceiling of Rs. 10,000 as maintenance and includes the preference to dispose of applications of senior citizens from the age of 60 onwards; and

(d) if so, the details thereof

(a) & (b): As per Census 2011, senior citizens constitute 8.6% of the total population of the country. The Government announced the National Policy on Older Persons (NPOP) in 1999 which values an age-integrated society to strengthen bonds between the young and the old. The Maintenance and Welfare of Parents and Senior Citizens Act, 2007 was enacted to emphasize upon the filial responsibility of children/relatives to take care of their parents/senior citizens so as to enable them to lead a normal life.

The Department has recently launched the National Action Plan for the welfare of Senior Citizens (NAPSrC) to enable them to lead a life of dignity. It envisages programmes for financial security; healthcare and nutrition; shelter and welfare; protection of life and property; active and productive ageing etc. To encourage inter-generational bonding, it includes interventions such as convergence of Senior Citizen Homes with Children”s Homes, motivation for youth to stay with the elderly, value education for youth on caring and sharing etc.

An Inter-generational walkathon is organized on 1st October every year to celebrate International Day of Older Persons. Books prescribed by National Council for Educational Research and Training (NCERT) in the primary classes include issues relating to strengthening of family ties. Apart from this, State Governments also take measures in awareness generation and promoting inter-generational bonding.

(c) & (d): The Government has introduced ‘The Maintenance and Welfare of Parents and Senior Citizens (Amendment) Bill, 2019’ in the Parliament. In the Bill, ceiling of Rs. 10,000/- as maintenance allowance as given in the existing Act, has been removed. Provisions for timely disposal of maintenance petitions of the Parents (those below 60 years) and Senior citizens have also been incorporated in the Bill and priority in disposal of petitions of parents and senior citizens of 80 years and above have also been made. 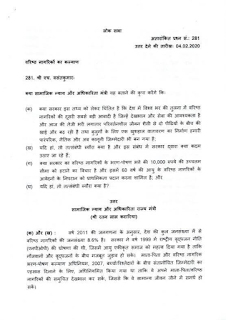 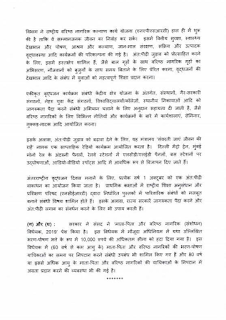